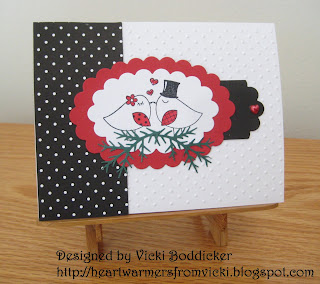 My sister and her husband are celebrating their anniversary this coming Friday.  Since she isn't going to be home then I sent her card early.

I used the Quickutz Scalloped Ovals for the image and red layer.  I also cut a strip of black and die cut just the end of it with the same dies.  If you are interested in these dies, you can find them at this eBay store:  Creating Everlasting Memories

The punch used is the McGill "Pine" punch which I can get for you at a discount if you are interested. 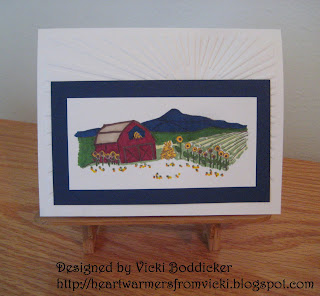 This first card doesn't appear to be a 90th Birthday card.  My father has been gone for twenty-two years.  Dad had a cousin who farmed with him and the cousin is celebrating his 90th birthday.   We are invited to a luncheon tomorrow for his celebration.  My mother also needed a card and I thought a card with a "farm" theme would be most appropriate for her to give him.
The stamp is from Whipper Snapper and has such a cute farm design.  I colored the image with Copic Markers and then mounted it onto an SU  Night of Navy piece of card stock.  Before mounting it onto the off white card base I wanted to emboss the front of the card.  The Craft Concepts "Sun Rays" folder worked out perfectly to have the "rays" coming up behind the scene. 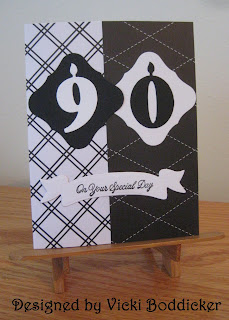 I like making Black and White cards so decided to use this combination to make the card from my husband and I.  Last week I ordered the dies for 1 through 0 from Creating Everlasting Memories.
The dies were on sale for only $1.99 each and I just knew I could get a lot of good out of them.  At the time I wasn't counting on having them in time to make a card for tomorrow but they arrived very quickly.
The Spellbinder's Labels One were used behind the number dies and one of the Spellbinders Ribbon  Banners was used for the sentiment which was from a Stampendous stamp set.
Both of the Spellbinders sets can be purchased from me at a discount.   I'd love to hear your comments.  Thank you for coming by!
- July 22, 2011 3 comments:

AN APPLE A DAY 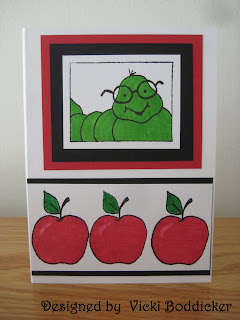 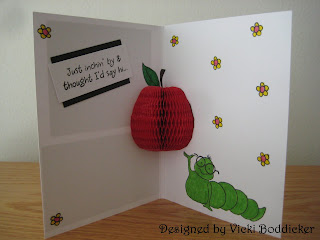 I'm not sure when Inky Antics introduced these cute new stamp sets, but they make such fun cards!  This stamp set is 11025MC Caterpillar HoneyPOP Clear Set.  There are 12 sets in all and each is cuter than the next one.  They are designed to be used with the special Honeycomb Paper, but can be used to make really fun cards even if you don't purchase the special pads of paper.
The good news is that I can now order these sets for you.  They retail for as much as $13.99.  My price for the stamp sets would be $9.75 + S&H.  The special paper retails for as much as $6.99 + S&H. My price for each color would be $4.80.   I always combine items for shipping to keep the cost down for the customer.   If you are interested in these stamp sets and possibly the special papers, you can see all of the set and color here:  Inky Antics   (While you visit that link you can also get a pretty good idea of how many different products I can order for you.  Just contact me if you see anything else you would like.)
Hope you are managing to stay cool wherever you are.  So much of the country is experiencing such terribly hot temperatures!!!  Thanks for stopping by!
- July 21, 2011 5 comments:

My husband and I just returned from 5 days away.  It had been a while so it was good to "get out of town" for a short trip.........shorter than we planned.  Our route took us on I-80 toward Council Bluffs IA and then North on I-29.  We saw very large sand bags still in place in several areas holding water back from the Missouri River flooding coming out on the Interstate.
Our trip included going to the Blue Bunny Ice Cream parlor (in LeMars, Iowa), 1880 Town on I-90 in South Dakota (lots of pictures and items from the Dances With Wolves Movie and buildings depicting an old western town) and Devils Tower in Wyoming.
We had planned to go to Theodore Roosevelt National Park in North Dakota but soon found out that the closest available place to stay along I-94 was over 200 miles away so that visit will have to be sometime in the future.  Although we were disappointed we learned that many of the motel rooms are being occupied by flood victims which has devastated so much of the state.  We figured they needed the rooms more than we did.
Since I need to get organized after getting home I'm just going to share a couple of pictures from our trip. 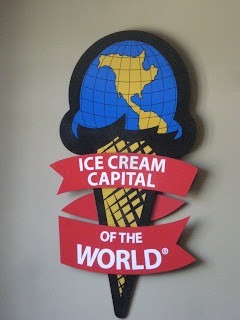 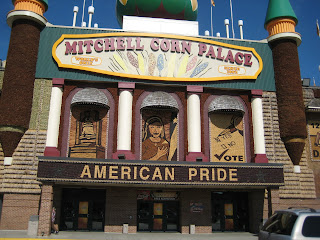 This is the only Corn Palace in the world.........we were told.  All of the decorating on the outside of the building is done with corn and they change the designs every year.  You will find it in Mitchell SD. 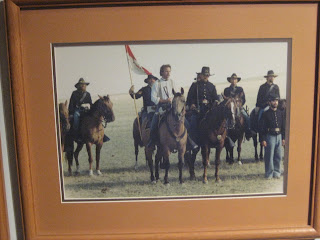 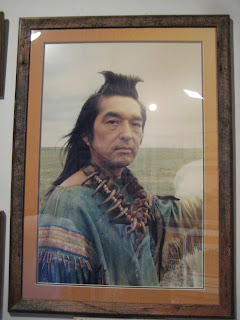 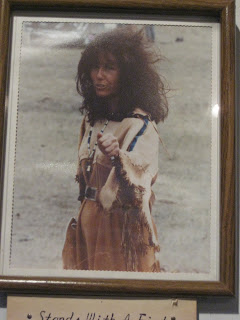 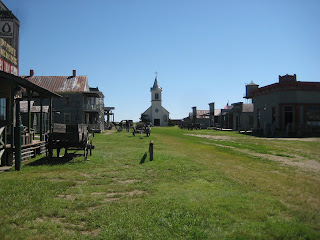 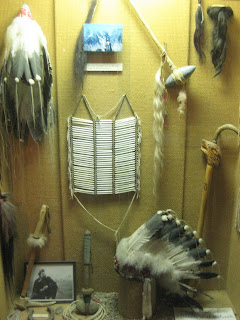 These are just a few of the pictures I took at 1880 Town which is on I-90 in South Dakota.  It's a fun place to visit and they have a diner made up of passenger train cars.  Information said that the entire Dances With Wolves movie was filmed in South Dakota.  The landscape we saw in the area sure looked like the movie. 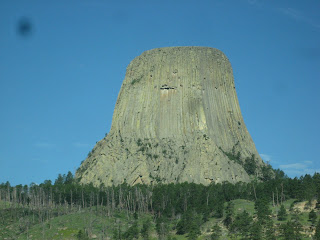 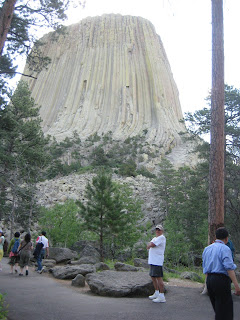 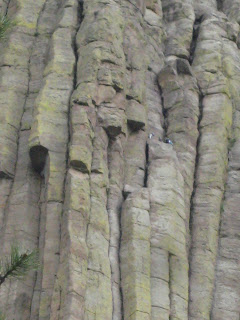 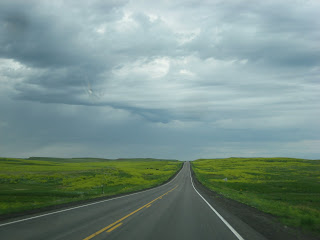 Devils Tower in Wyoming is one National Park we had managed to miss on our various trips West so we made a special trip west to see it.  I've seen many pictures of it but to see it in person was so special.  There is a 1.3 mile black topped trail around it which we walked..........so worth it!  If you look closely at the third picture you will see 3 people who were climbing the tower and were about 2/3 of the way up when we saw them.

The last picture shown here is one I just had to take because we saw a lot wild flowers along the road but then we were seeing fields of them......beautiful yellow flowers.......and they seemed to be contained in certain areas.  I wish I knew what they were and if they are grown for a particular purpose.

The rest of our trip was mainly driving so not a lot of interesting pictures to post after that.  We did see areas in North Dakota where the water had been across the highway and sandbags in low spots were still holding some water back.


I'll try to get back to posting cards soon but have some things I need to get caught up on.  Hope you enjoyed these pictures if you have never visited the sites.
- July 15, 2011 2 comments:

BIRTHDAY CARD FOR A FRIEND 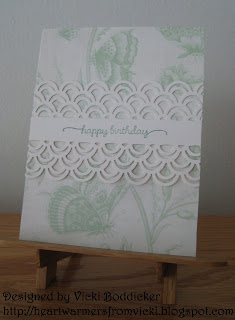 My friend, Joyce, has a birthday coming up soon and rather than send the card late, I sent it early to make sure she had it in plenty of time.

The paper is beautiful and didn't really need a lot of extra pizzaz to it, to I simply added the punched section in the middle using the Martha Stewart punch "Double Arches" and then stamping the Happy Birthday in the middle. 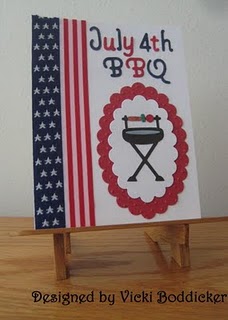 This is a card I made as a project for the Creating Memories in Time Blog and it was shown there in June.  The dies for the letters, grill and ovals can all be puchased at Creating Everlasting Memories. I very seldom post cards for challenges but decided that this technique was something new to me and I wanted to share it on the PPA 100 challenge.
One of our Yahoo Group swaps this month was to make a card using the Faux Wood technique.  I had never even heard of it.  My first thought was that I was going to pass.  The other day I finally gave in and gave it a try.  My first attempt met with laughter from my husband......and me shaking my head.  Our group organizer challenged me to give it a second try and I am so glad I did.
The background papers are some pieces from 12 x 12 dp that I had in my stash.  I don't know if I can fully explain the faux wood technique so if you are interested, I can send you a link to the instructions I followed on Split Coast Stampers.  I think mine turned out to look like "Cherry" wood.
The bird is a dimensional sticker and fit perfectly inside the frame.  The picture doesn't show it very well, but the "sticks" poking out from the nest are a metallic material that really matched the color of the frame.
Let me know what you think and consider giving this method a try -- it was fun.  Thank you for stopping by!
- July 02, 2011 7 comments: 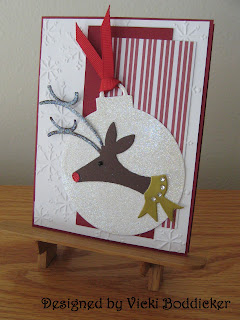 It is stinking HOT here in Iowa today so I decided to try to cool off by showing you a card I have all ready for Christmas 2011.
The card base is SU Cherry Cobbler cardstock.  I embossed a white piece of card stock with a Sizzix Snowflake embossing folder and then trimmed it down to slightly smaller than 4 1/4 x 5 1/2.  This piece was attached to the front of the card base.
The next layers are made from another strip of SU Cherry Cobbler and Merrymint AC Patterned Paper.
Using a Lifestyle Crafts/Quickutz Ornament die I cut out a piece of double sided sticky paper.  I only removed one side of the paper and sprinkled the entire top with Hero Arts Prisma Glitter.
Next I used a Lifestyle Crafts Quickutz Reindeer using SU Chocolate Chip, SU Cherry Cobbler and a piece of gold shiny card stock.  I added glitter to the reindeer antlers (not sure I would do that again).  These pieces were assembled and then attached to the ornament.  I added clear gems to the collar to add some sparkle.  The finishing touch was a piece of red gross grain ribbon through the loop of the ornament.

If it is hot where you are, I hope you can look at this card and imagine a cooler temperature.  Tell me if it works.  Thank you for coming by!
The Quickutz dies are available at Creating Everlasting Memories
Hero Arts glitter can be ordered by emailing me. 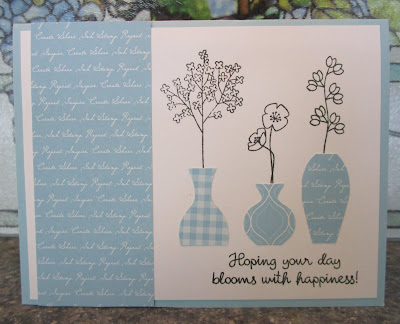 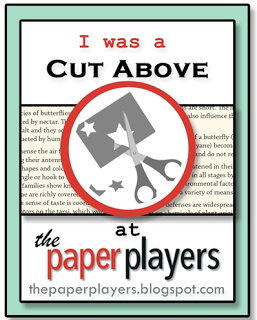